Do you know why the term “music” is extremely debatable in the Muslim world? What is the relationship between music, Islam, and spirituality?

Dr Karim Gillani teaches Music and Religious Studies at the University of Alberta. He is also an expert in Music and Islam, Sufism of South Asia, Popular Music and Literature in Pakistan, Muslim Faith and Practices, Muslim Migration, Diaspora and Transmission. He regularly presents papers at national and international conferences and has published various articles in academic journals. He has done extensive field research in devotional and contemporary popular music in the Indian subcontinent and amongst the western diaspora, and has written short documentaries.

Dr Gillani was one of the scholarship recipients of the IIS’s Doctoral Scholarship Programme in 2004. He obtained his PhD in Music and Religious Studies at the University of Alberta (Canada) in 2012. His PhD dissertation, entitled ‘Sound and Recitation of Khoja Ismaili Ginans: Tradition and Transformation’, represents pioneering ethno-musicological research that situates ginans within the wider context of Muslim piety in general and South Asian poetic and musical contexts in particular.

Dr Gillani is also an accomplished vocalist, composer and songwriter. He has received training in Hindustani classical and Sufi music from various renowned musicians from India and Pakistan. He released his first album, Jhoom Jhoom: Celebration of A Lifetime, in 2007. Dr Gillani extensively performs in North America and some of his performance highlights include spots on CBC Television, CJSR and CKUA radio, as well as Radio Pakistan. In 2008, he performed at the opening ceremony of the Delegation of the Ismaili Imamat and at the foundation ceremony of the Aga Khan Museum in Toronto in 2010. 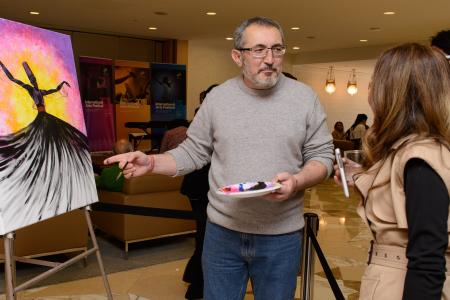 CHAI Showcase: A Platform for Artists