A Champion for Equality from Canada to Afghanistan

Nurjehan Mawani (second from the right) with Canadian Ambassador Deborah Lyons (first from the left) in Kabul in 2015. Photo: Courtesy of AKDN.

When Nurjehan Mawani moved to Vancouver in 1982, she was surprised to see people making an effort to say her name. It was a welcome change. A young lawyer with a passion for pushing back against inequalities, she had moved to Canada with her husband after a decade in England, where most people hadn't bothered.

“I came to Canada and I saw complicated Ukrainian names and other names, and I don't think anybody asked me, ‘Is there a short form for your name?’” she recalls.

Canada's culture of acceptance was refreshing for Mawani, who was raised in colonial Mombasa, where all aspects of society, ranging from hospitals to restaurants, were segregated by race: European, South Asian and African.

She remembers waiting for the school bus for South Asian children as half-empty buses filled with white children rolled by. The experience affected her deeply.

“You couldn’t go on the same bus, you couldn’t live in the same areas,” recalls Mawani. “You would see buses with the white children and you were standing waiting for your own bus to come.”

While Mawani remembers the feeling of exclusion strongly, she also remembers that everyone accepted the situation. Later, she would come to understand how an individual’s life is shaped by their background—the colour of their skin, their gender, their socioeconomic status—and set down a path to combat these inequalities. It soon became her life’s work. 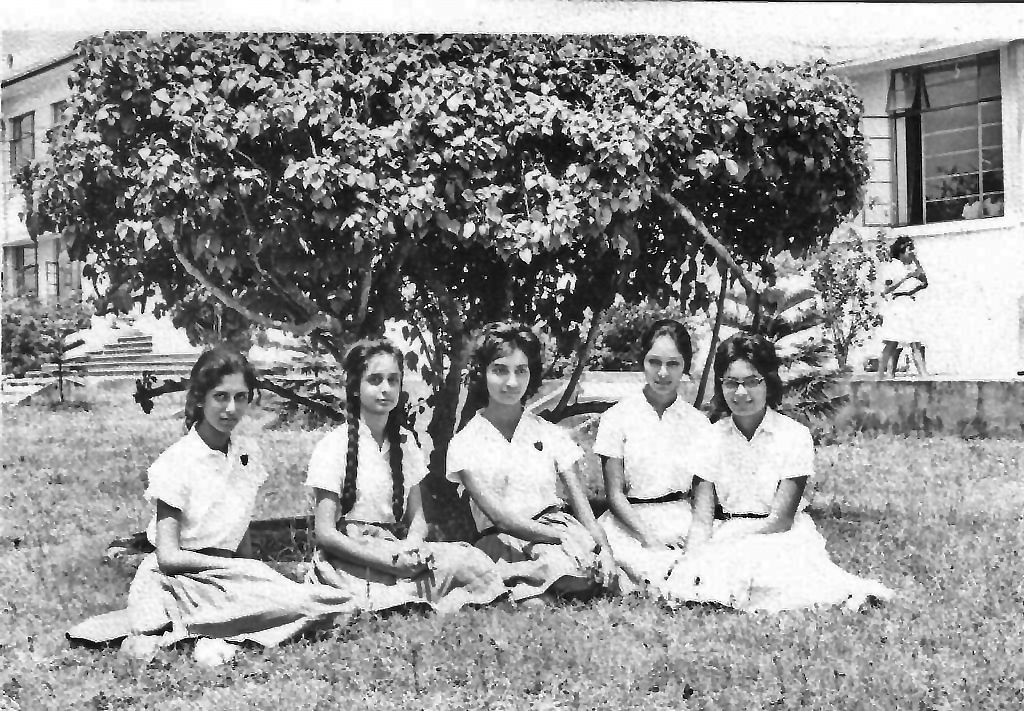 Mawani (left) with classmates at the Aga Khan High School in Mombasa, Kenya, in 1963. Photo: Courtesy of Nurjehan Mawani.

At 17, Mawani left East Africa to attend law school in England and gain the tools to begin her fight for justice. She qualified as a barrister and was called to the bar in London in 1968, but soon found her profile, as a woman with dark hair from outside the establishment, made it too difficult for her to practice in court chambers. She ended up retraining and qualifying as a solicitor, enabling her to work behind the scenes.

“The irony was that I would then meet clients and brief other barristers—white males approved by the establishment—who would then plead for my clients in court, using my research and my legal advice!” she recalled in 2004, during a convocation address at the University of Ottawa, which awarded her an honorary doctorate.

In 1982, Mawani moved with her husband and two children to Vancouver, began practicing law and jumped straight into public service. As vice chair of the Aga Khan Foundation Canada and chair of the Ismaili Council’s Women’s Portfolio, she was part of a group of women who started the World Partnership Walk in Vancouver in 1985.

They came up with the idea because they were concerned for women in developing countries who walked “for miles and miles” to get wood for fires or water for cooking and cleaning.

“How do you express solidarity with the women and the girls who were doing this all the time, every day from the time they wake up at four and five in the morning?” she asks. “We will walk with them. That’s how it all started.”

Mawani remembers reaching out to politicians in the early years. An appearance by Canada’s Minister of Defence, Kim Campbell, who later became prime minister in 1993, elevated the walk’s status.

Within three years, the World Partnership Walk spread to Canada’s other major cities. Today, it’s held in 10 cities across Canada and raises millions of dollars annually to combat poverty in developing countries.

The turning point for Mawani’s career came in 1986, when a partner at her law firm recommended her for a position on the Immigration Appeal Board.

When it was replaced in 1989 by the Immigration and Refugee Board, an independent administrative tribunal that makes decisions on thousands of immigration and refugee cases annually, Mawani was appointed deputy chair. In 1992, she became the first female chairperson.

During her tenure, Mawani pushed for the rights of women and minorities around the world.

She used her seven-year term to address a lesson from her childhood—that sometimes access to opportunity is not enough if an individual or group comes from a disadvantaged situation.

She discovered this while tutoring fellow students in school: some of her classmates didn’t grow up surrounded by books in their houses like she had, or with parents who placed emphasis on education.

Her landmark achievement was the creation of gender-based guidelines for refugee claimants, making Canada the first country in the world to recognize as refugees those fleeing gender-based persecution, such as domestic violence, forced abortions and female genital mutilation. Other countries followed Canada’s lead. 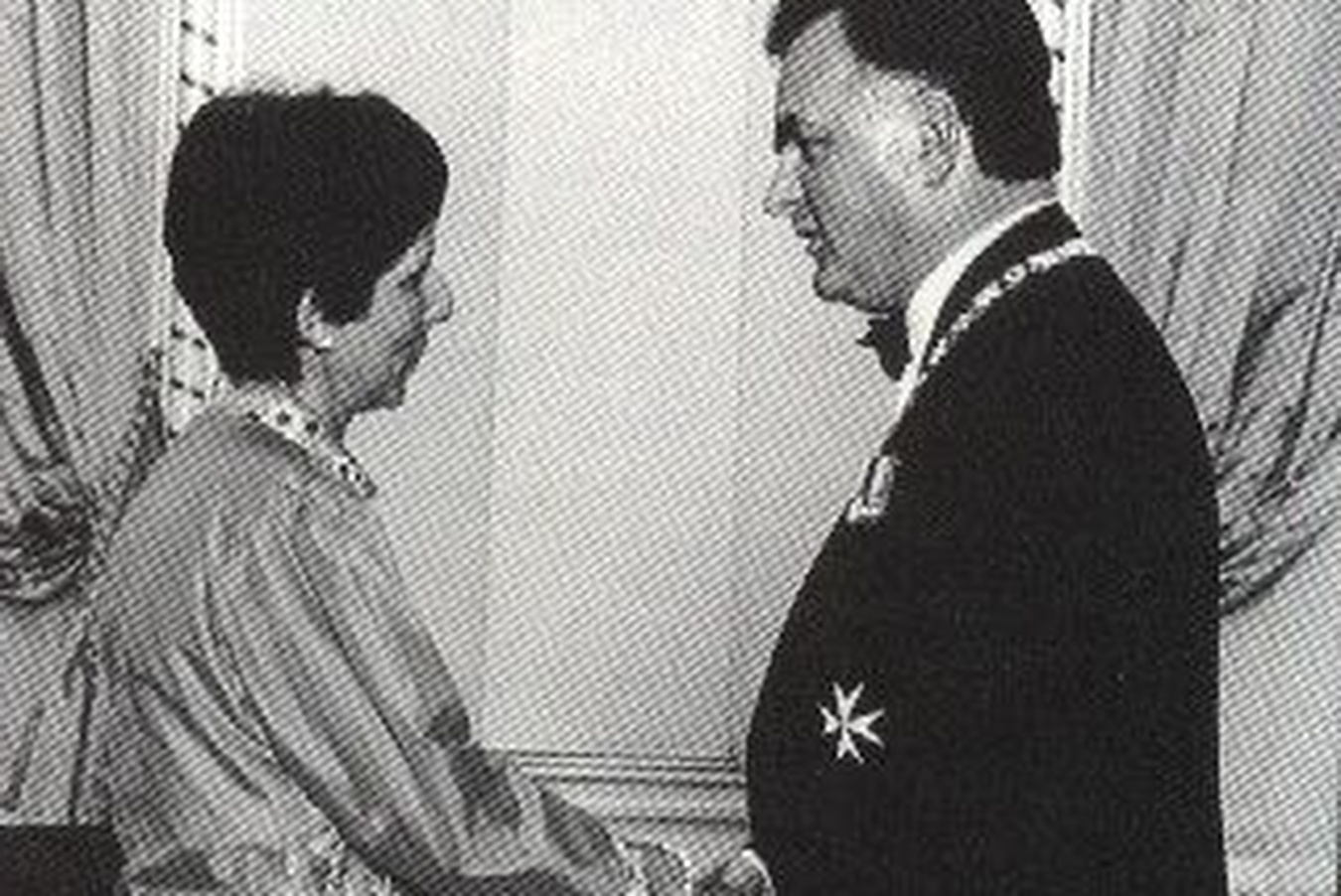 Mawani was appointed to the Order of Canada in 1993. Photo: Courtesy of Nurjehan Mawani.

In 1993, Mawani became the first Ismaili to receive the Order of Canada for her dedication to bettering the lives of Canadians by championing multiculturalism and advocating for the rights of female refugees.

She has since been awarded the Queen’s Golden Jubilee Medal, the UNIFEM Canada Award for outstanding contributions to the advancement of women, and the Outstanding Achievement Award of the Public Service of Canada, among others. She says having a supportive husband and children played an essential role in her accomplishments.

Former Governor General of Canada Adrienne Clarkson observed Mawani’s work over the years. “She comes in with the idea of listening to other people and seeing what their point of view is,” says Clarkson. “With her high intelligence and her ability to synthesize things, she's able to put together a whole picture. That's a great strength.”

In 1999, after completing her tenure as IRB chair, Mawani served as commissioner of the Public Service Commission and then senior adviser on diversity to the Canada School of Public Service. She also served as chair of the National Conciliation and Arbitration Board, which provides dispute resolution services for Ismailis.

In 2005, Mawani began a 14-year term as the diplomatic representative of the Aga Khan Development Network (AKDN) in Central Asia, serving first in Kyrgyzstan for eight years, followed by six years in Afghanistan. Over these years, she developed many strong relationships that would help her share the AKDN’s vision and work. 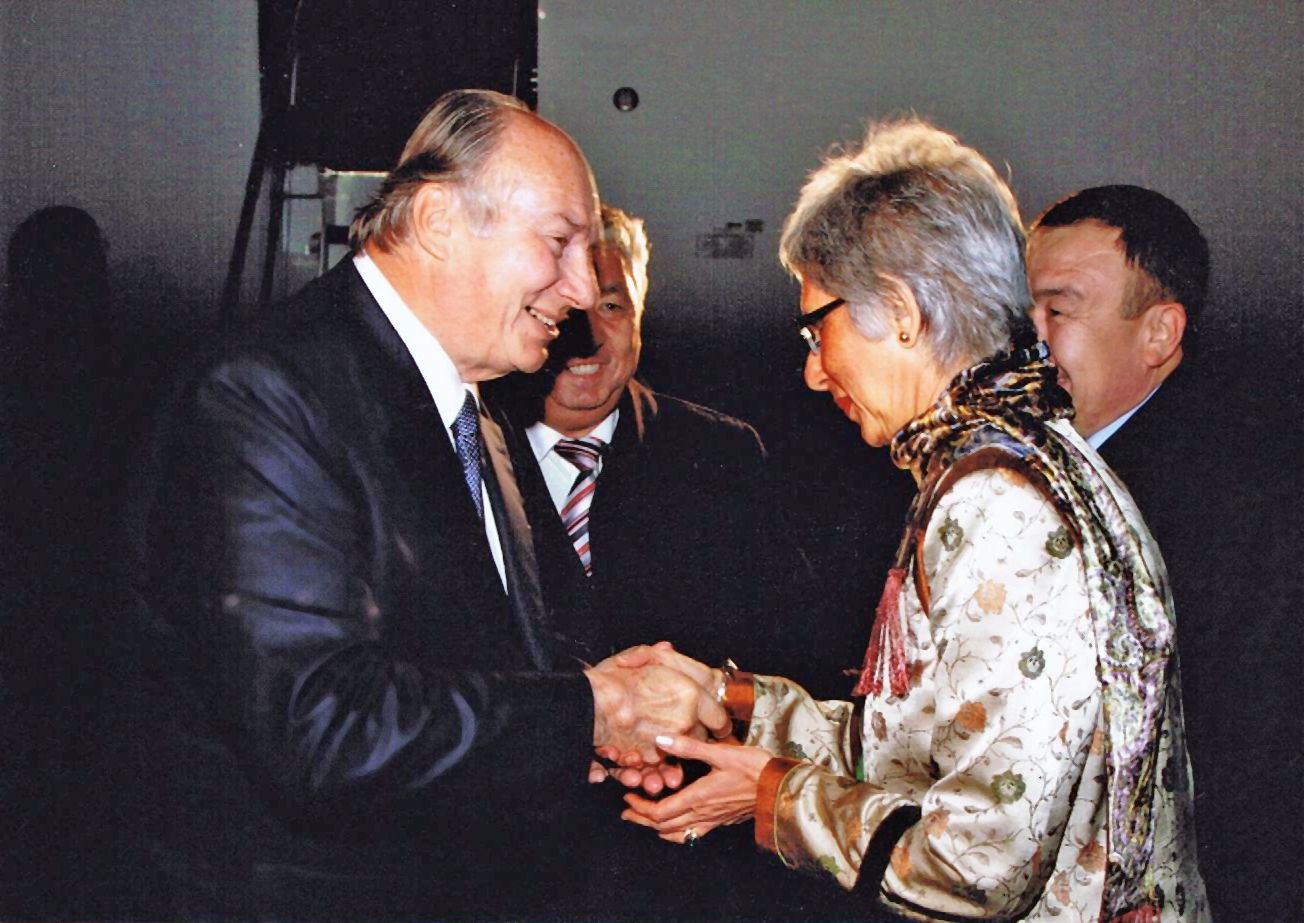 Mawani receiving His Highness the Aga Khan in Bishkek, Kyrgyzstan, during his Golden Jubilee tour of Central Asia in November 2008. Photo: Courtesy of Nurjehan Mawani.

In Kyrgyzstan, she worked on an AKDN initiative addressing the yearly school stoppage children of mountain farmers faced. Every year, education would stop for four to five months during grazing season, as everyone, including parents and teachers, took their animals to the jailoos, or high pastures. The initiative saw yurts built in the mountains to house schools. Parents took responsibility for teachers’ animals during classes.

“If everybody—parents, teachers, government and, in this case, AKF—worked together, education was not disrupted,” says Mawani, who took policymakers and diplomats from around the world to see these schools. Such jailoo kindergartens have since been successfully introduced in hundreds of communities in Tajikistan and Kyrgyzstan. 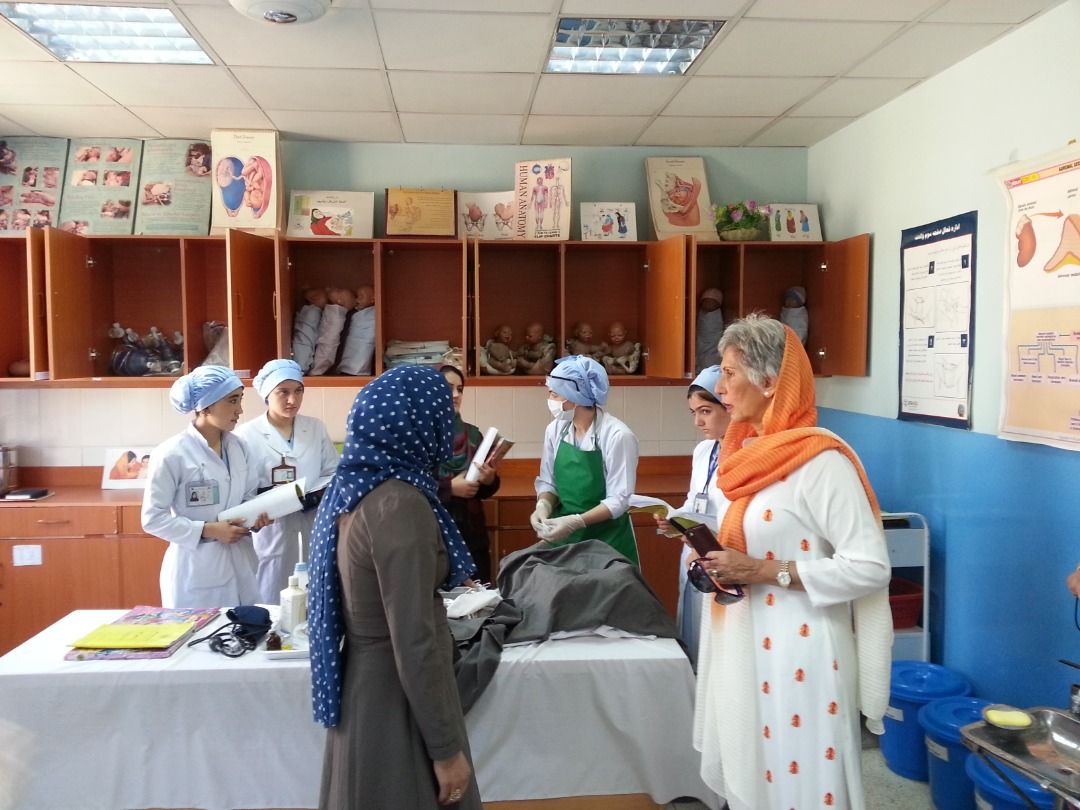 Mawani on a visit to the Aga Khan Health Services Midwifery Programme in Faizabad, Afghanistan, in 2015. Photo: Courtesy of Nurjehan Mawani.

In 2013, Mawani became the first female diplomat to work in Afghanistan in over a decade. While being a woman in a conservative country presented challenges, it also gave her a powerful advantage: the ability to speak to Afghan women.

“I had access to a whole group that male diplomats did not,” she explains. Mawani focused on  bringing their voices to the forefront, and helping mentor and champion them to become leaders.

“In our development programs, I would always be asking about impact on women,” she says. Mawani advocated for increasing women’s participation in education and health programs, as well as their economic empowerment.

“I knew then and I know now that if they had the access and the opportunity, they would thrive,” she says. 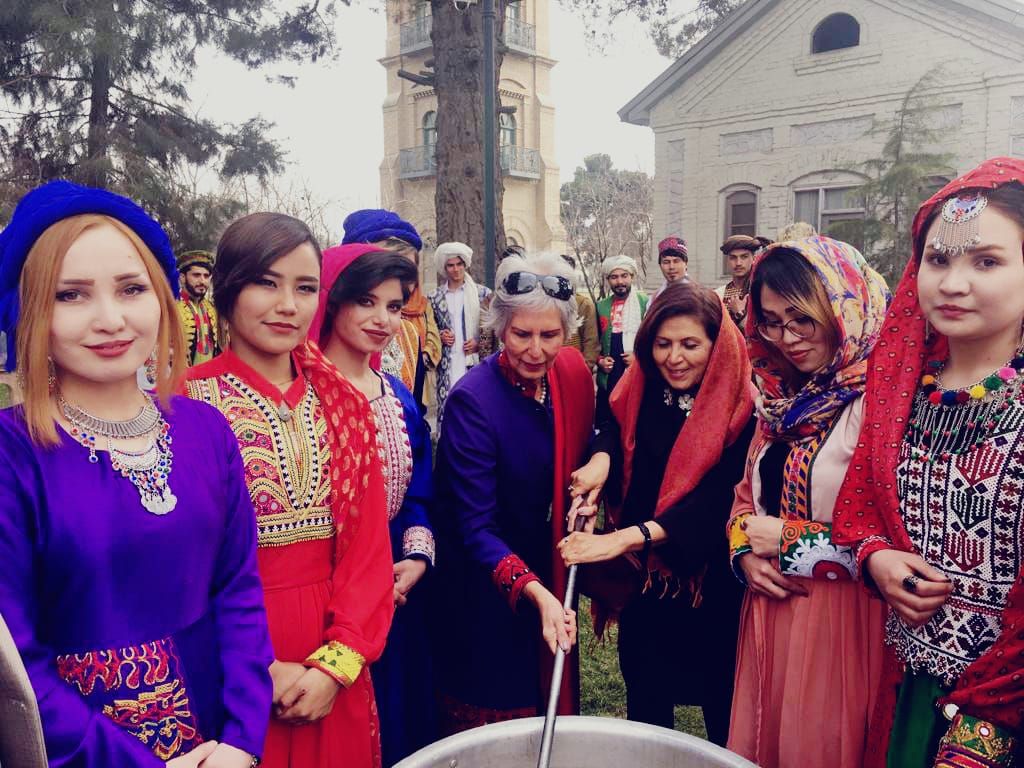 Shams Kassim-Lakha, president of the Aga Khan University for nearly 30 years and Mawani’s successor as diplomatic representative of the AKDN in Kyrgyzstan, recalls Mawani’s ability to build connections.

“Unless you develop trust with the decision makers in a country or with diplomats who are your colleagues, you cannot expect them to work with you or confide in you, or to help you in your objectives,” says Kassim-Lakha. “She has the ability to win over friends and create a sense of confidence in them.”

Reflecting on her career, Mawani circles back to a quote from a speech the Aga Khan made in 2014 at the North-South Prize Ceremony in Lisbon: “Human progress depends on human cooperation, even across difficult lines of division.”

Mawani lives by that message. She says it is key to reducing inequities around the world.

“You can’t do it alone,” she says. “The important thing is you’re doing it together.”